Cratered Surface of Ceres in Motion 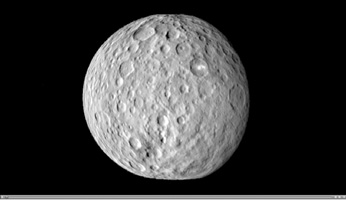 The surface of Ceres is covered with craters of many shapes and sizes, as seen in this new animation of a map of the dwarf planet's surface. To make this animation, a map of Ceres, comprised of images captured by NASA's Dawn spacecraft on Feb. 19, 2015 from a distance of nearly 29,000 miles (46,000 kilometers), was projected onto a globe. Ceres' actual rotation is much slower; it takes about nine hours.

An unusually large basin nearly 186 miles (300 kilometers) across is seen just south of the equator, with a shallow interior, faint rim and low-relief mounds within. Several bright spots are seen, including two that are very bright and lie within a single crater north of the equator. The bright spot in the center of that crater too small to be resolved at this distance, so its true brightness is not yet known.