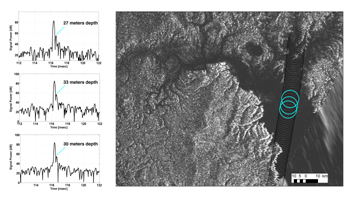 Cassini's Titan flyby on August 21, 2014, included a segment designed to collect altimetry (or height) data, using the spacecraft's radar instrument, along a 120-mile (200-kilometer) shore-to-shore track on Kraken Mare, Titan's largest hydrocarbon sea. For a 25-mile (40-kilometer) stretch of this data, along the sea's eastern shoreline, Cassini's radar beam bounced off the sea bottom and back to the spacecraft, revealing the sea's depth in that area. Observations in this region, near the mouth of a large, flooded river valley, showed depths ranging from 66 to 115 feet (20 to 35 meters).

Plots of three radar echoes are shown at left, indicating depths of 89 feet (27 meters), 108 feet (33 meters) and 98 feet (30 meters), respectively. The altimetry echoes show the characteristic double-peaked returns of a bottom-reflection. The tallest peak represents the sea surface; the shorter of the pair represents the sea bottom. The distance between the two peaks is a measure of the liquid's depth.

The Synthetic Aperture Radar (SAR) image at right shows successive altimetry observations as black circles. The three blue circles indicate the locations of the three altimetry echoes shown in the plots at left.

The Cassini-Huygens mission is a cooperative project of NASA, the European Space Agency and the Italian Space Agency. NASA's Jet Propulsion Laboratory, a division of the California Institute of Technology in Pasadena, manages the mission for NASA's Science Mission Directorate, Washington, DC. The Cassini orbiter was designed, developed and assembled at JPL. The radar instrument was built by JPL and the Italian Space Agency, working with team members from the United States and several European countries.