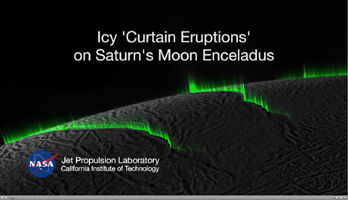 Recent research suggests much of the eruption activity on the surface of Saturn's moon Enceladus could be in the form of broad, curtain-like eruptions, rather than discrete jets.

This simulation, which begins and ends with a real image from NASA's Cassini spacecraft, demonstrates how the appearance of discrete jets could be an optical illusion that varies based on viewing geometry. As the perspective rotates around Enceladus' south pole, "phantom" jets seem to appear and disappear.

The researchers involved in the study think some prominent jets likely are what they appear to be -- meaning individual, discrete sources -- but most of the activity seen in the images can be explained as curtain eruptions.