Ceres in Half Shadow 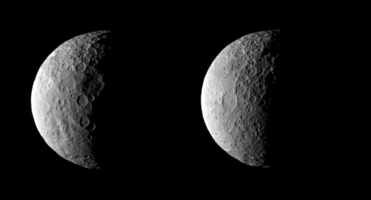 Uncropped Version
Click on the image for larger uncropped version

NASA's Dawn spacecraft took these images of dwarf planet Ceres from about 25,000 miles (40,000 kilometers) away on Feb. 25, 2015. Ceres appears half in shadow because of the current position of the spacecraft relative to the dwarf planet and the sun. The resolution is about 2.3 miles (3.7 kilometers) per pixel.

Dawn is due to be captured into orbit around Ceres on March 6.