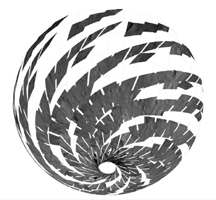 The mosaic of Visible and Infrared Spectrometer (VIR) data in Figure 1 shows the location of the data acquired by VIR during the HAMO (high-altitude mapping orbit) phase of the Dawn mission. VIR can image Vesta in a number of different wavelengths of light, ranging from the visible to the infrared part of the electromagnetic spectrum. This mosaic shows the images taken at a wavelength of 550 nanometers, which is in the visible part of the electromagnetic spectrum. During HAMO VIR obtained more than 4.6 million spectra of Vesta. It is clear from this image that the VIR observations are widely distributed across Vesta, which results in a global view of the spectral properties of Vesta's surface.

Figure 1 shows Vesta's southern hemisphere (lower part of the image) and equatorial regions (upper part of the image). NASA's Dawn spacecraft obtained these VIR images with its visible and infrared spectrometer in September and October 2011. The distance to the surface of Vesta is around 700 kilometers (435 miles) and the average image resolution is 170 meters per pixel.

The Dawn mission to Vesta and Ceres is managed by NASA's Jet Propulsion Laboratory, a division of the California Institute of Technology in Pasadena, for NASA's Science Mission Directorate, Washington D.C. UCLA is responsible for overall Dawn mission science. The visible and infrared mapping spectrometer was provided by the Italian Space Agency and is managed by the Italy's National Institute for Astrophysics, Rome, in collaboration with Selex Galileo, where it was built.

Dawn's mission is managed by JPL for NASA's Science Mission Directorate in Washington. Dawn is a project of the directorate's Discovery Program, managed by NASA's Marshall Space Flight Center in Huntsville, Alabama. UCLA is responsible for overall Dawn mission science. Orbital ATK, Inc., in Dulles, Virginia, designed and built the spacecraft. The German Aerospace Center, the Max Planck Institute for Solar System Research, the Italian Space Agency and the Italian National Astrophysical Institute are international partners on the mission team. For a complete list of acknowledgments, see http://dawn.jpl.nasa.gov/mission .