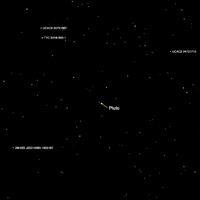 As one NASA spacecraft sailed past the distant ice world of Pluto, collecting never-before-seen vistas and invaluable science data, another spacecraft turned its gaze in that direction from its outpost at Saturn. NASA's Cassini spacecraft took a momentary break from its duties to capture this far-off portrait around the time of the New Horizons encounter with Pluto.

The image was taken within a few minutes of New Horizons' closest approach to Pluto. After New Horizons, Cassini was the closest spacecraft to Pluto at the time of the flyby.

Pluto is the bright dot closest to the center of the field of stars seen in this view. A labeled version of the image, indicating Pluto's position, is also presented here. The four stars identified in the labeled view have visual magnitudes between about 11 and 12.

The entire Pluto system -- the dwarf planet and all of its moons -- is below the resolution of this image, thus the small bright specks near the main dot representing Pluto are likely noise (possibly due to what astronomers call the point-spread function). Charon and the other moons would not be resolved at this scale.

The image was obtained using the Cassini spacecraft narrow-angle camera on July 14, 2015 at a distance of about 2.4 billion miles (3.9 billion kilometers) from Pluto.