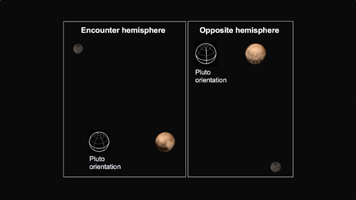 This pair of approximately true color images of Pluto and its big moon Charon, taken by NASA's New Horizons spacecraft, highlight the dramatically different appearance of different sides of the dwarf planet, and reveal never-before-seen details on Pluto's varied surface. The views were made by combining high-resolution black-and-white images from the Long Range Reconnaissance Imager (LORRI) with color information from the lower-resolution color camera that is part of the Ralph instrument.

The left-hand image shows the side of Pluto that always faces away from Charon -- this is the side that will be seen at highest resolution by New Horizons when it makes its close approach to Pluto on July 14th. This hemisphere is dominated by a very dark region that extends along the equator and is redder than its surroundings, alongside a strikingly bright, paler-colored region which straddles the equator on the right-hand side of the disk. The opposite hemisphere, the side that faces Charon, is seen in the right-hand image. The most dramatic feature on this side of Pluto is a row of dark dots arranged along the equator. The origin of all these features is still mysterious, but may be revealed in the much more detailed images that will be obtained as the spacecraft continues its approach to Pluto. In both images, Charon shows a darker and grayer color than Pluto, and a conspicuous dark polar region.