All Clear for New Horizons 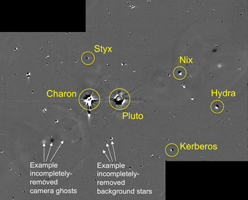 This illustration shows some of the final images used to determine that the coast is clear for New Horizons' flight through the Pluto system. These images show the difference between two sets of 48 combined 10-second exposures with New Horizons Long Range Reconnaissance Imager (LORRI) camera, taken at 8:40 UTC and 10:25 UTC on June 26, 2015, from a range of 21.5 million kilometers (approximately 13 million miles) to Pluto. The known small moons, Nix, Hydra, Kerberos and Styx, are visible as adjacent bright and dark pairs of dots, due to their motion in the 105 minutes between the two image sets. The images have been extensively processed to remove the glare and "ghosts" (i.e., lens flare) from Pluto and Charon, and also to remove background stars, though many of the brighter stars are imperfectly removed and appear as irregular bright and dark blobs. These and other similar sets of images demonstrate that there are no previously unknown moons brighter than 15 times fainter than Styx (the faintest known moon) in the region outside of Charon's orbit, or brighter than five times fainter than Styx in the region between Charon's orbit and a few thousand kilometers above Pluto's surface.