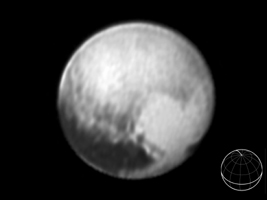 This image of Pluto was taken by New Horizons' Long Range Reconnaissance Imager (LORRI) at 4:18 UT on July 9, 2015, from a range of 3.9 million miles (6.3 million kilometers). It reveals new details on the surface of Pluto, including complex patterns in the transition between the very dark equatorial band (nicknamed "the whale"), which occupies the lower part of the image, and the brighter northern terrain. The bright arc at the bottom of the disk shows that there is more bright terrain beyond the southern margin of the "whale." The side of Pluto that will be studied in great detail during the close encounter on July 14 is now rotating off the visible disk on the right hand side, and will not be seen again until shortly before closest approach.

Three consecutive images were combined and sharpened, using a process called deconvolution, to create this view. Deconvolution enhances real detail but can also generate spurious features, including the bright edge seen on the upper and left margins of the disk (though the bright margin on the bottom of the disk is real).

The wireframe globe shows the orientation of Pluto in the image: thicker lines indicate the equator and the prime meridian (the direction facing Charon). Central longitude on Pluto is 86°.

For more information about the New Horizons mission, visit http://www.nasa.gov/newhorizons and http://pluto.jhuapl.edu .