Dark and Bright Terrains of Pluto 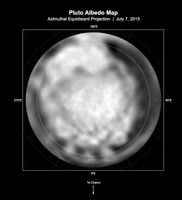 These circular maps shows the distribution of Pluto's dark and bright terrains as revealed by NASA's New Horizons mission prior to July 4, 2015. Each map is an azimuthal equidistant projection centered on the north pole, with latitude and longitude indicated. Both a gray-scale and color version are shown. The gray-scale version is based on 7 days of panchromatic imaging from the Long Range Reconnaissance Imager (LORRI), whereas the color version uses the gray-scale base and incorporates lower-resolution color information from the Multi-spectral Visible Imaging Camera (MVIC), part of the Ralph instrument. The color version is also shown in a simple cylindrical projection in PIA19700 .

In these maps, the polar bright terrain is surrounded by a somewhat darker polar fringe, one whose latitudinal position varies strongly with longitude. Especially striking are the much darker regions along the equator. A broad dark swath ("the whale") stretches along the equator from approximately 20 to 160 degrees of longitude. Several dark patches appear in a regular sequence centered near 345 degrees of longitude. A spectacular bright region occupies Pluto's mid-latitudes near 180 degrees of longitude, and stretches southward over the equator. New Horizons' closest approach to Pluto will occur near this longitude, which will permit high-resolution visible imaging and compositional mapping of these various regions.

For more information about the New Horizons mission, visit http://www.nasa.gov/newhorizons and http://pluto.jhuapl.edu .