The Icy Mountains of Pluto 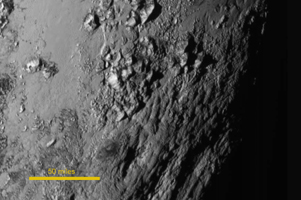 New close-up images of a region near Pluto's equator reveal a giant surprise: a range of youthful mountains rising as high as 11,000 feet (3,500 meters) above the surface of the icy body.

The mountains likely formed no more than 100 million years ago -- mere youngsters relative to the 4.56-billion-year age of the solar system -- and may still be in the process of building. That suggests the close-up region, which covers less than one percent of Pluto's surface, may still be geologically active today.

The youthful age estimate is based on the lack of craters in this scene. Like the rest of Pluto, this region would presumably have been pummeled by space debris for billions of years and would have once been heavily cratered -- unless recent activity had given the region a facelift, erasing those pockmarks.

Unlike the icy moons of giant planets, Pluto cannot be heated by gravitational interactions with a much larger planetary body. Some other process must be generating the mountainous landscape.

The mountains are probably composed of Pluto's water-ice "bedrock." Although methane and nitrogen ice covers much of the surface of Pluto, these materials are not strong enough to build the mountains. Instead, a stiffer material, most likely water-ice, created the peaks.

The close-up image was taken about 1.5 hours before New Horizons closest approach to Pluto, when the craft was 47,800 miles (770,000 kilometers) from the surface of the planet. The image easily resolves structures smaller than a mile across.