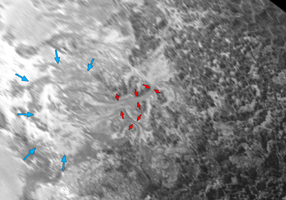 This image is re-projected from the oblique, backlit view shown in the new crescent image of Pluto. The backlighting highlights the intricate flow lines on the glaciers. The flow front of the ice moving into the informally named Sputnik Planum is outlined by the blue arrows (Figure 1). The origin of the ridges and pits on the right side of the image remains uncertain. This image is 390 miles (630 kilometers) across.