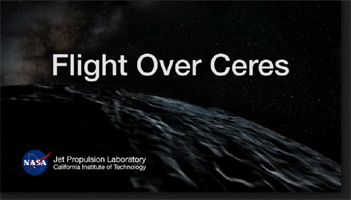 This simulated flight over Ceres emphasizes the most prominent craters, as well as the mountain Ahuna Mons. The movie shows Ceres in enhanced color, which helps to make visible subtle differences in the appearance of surface materials.

The movie was produced using images from Dawn's high-altitude mapping orbit. During that phase of the mission, which lasted from August to October 2015, the spacecraft orbited Ceres at an altitude of about 900 miles (1,450 kilometers).

Brownish surfaces indicate a surface layer rich in phyllosilicates, which are a typical mineral found in clays. Dawn scientists think the bluish features indicate areas with younger, fresher material including flows, pits and cracks. Bright deposits mark the youngest areas on Ceres, which may contain salts.

Dawn was the first mission to visit a dwarf planet, and the first mission outside the Earth-moon system to orbit two distinct solar system targets. After orbiting Vesta for 14 months in 2011 and 2012, it arrived at Ceres on March 6, 2015.

Dawn's mission is managed by JPL for NASA's Science Mission Directorate in Washington. Dawn is a project of the directorate's Discovery Program, managed by NASA's Marshall Space Flight Center in Huntsville, Alabama. UCLA is responsible for overall Dawn mission science. Orbital ATK, Inc., in Dulles, Virginia, designed and built the spacecraft. The German Aerospace Center, the Max Planck Institute for Solar System Research, the Italian Space Agency and the Italian National Astrophysical Institute are international partners on the mission team. For a complete list of acknowledgments, see http://dawn.jpl.nasa.gov/mission .