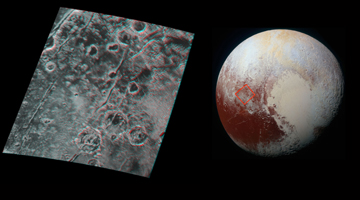 Context Figure
Click on the image for larger version

Global stereo mapping of Pluto's surface is now possible, as images taken from multiple directions are downlinked from NASA's New Horizons spacecraft. Stereo images will eventually provide an accurate topographic map of most of the hemisphere of Pluto seen by New Horizons during the July 14 flyby, which will be key to understanding Pluto's geological history.

This example, which requires red/blue stereo glasses for viewing, shows a region 180 miles (300 kilometers) across, centered near longitude 130 E, latitude 20 N (the red square in the global context image). North is to the upper left. The image shows an ancient, heavily cratered region of Pluto, dotted with low hills and cut by deep fractures, which indicate extension of Pluto's crust.

Analysis of these stereo images shows that the steep fracture in the upper left of the image is about 1 mile (1.6 kilometers) deep, and the craters in the lower right part of the image are up to 1.3 miles (2.1 km) deep. Smallest visible details are about 0.4 miles (0.6 kilometers) across.