The Youngest Crater on Charon? 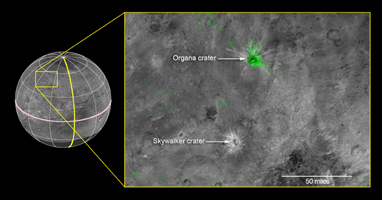 New Horizons scientists have discovered a striking contrast between one of the fresh craters on Pluto's largest moon Charon and a neighboring crater dotting the moon's Pluto-facing hemisphere. The crater, informally named Organa, caught scientists' attention as they were studying New Horizons' highest-resolution infrared compositional scan of Charon. Organa and portions of the surrounding material ejected from it show infrared absorption at wavelengths of about 2.2 microns, indicating that the crater is rich in frozen ammonia -- and, from what scientists have seen so far, unique on Pluto's largest moon. The infrared spectrum of nearby Skywalker crater, for example, is similar to the rest of Charon's craters and surface, with features dominated by ordinary water ice.

This composite image is based on observations from the New Horizons Ralph/LEISA instrument made at 10:25 UT (6:25 a.m. EDT) on July 14, 2015, when New Horizons was 50,000 miles (81,000 kilometers) from Charon. The spatial resolution is 3 miles (5 kilometers) per pixel. The LEISA data were downlinked Oct. 1-4, 2015, and processed into a map of Charon's 2.2 micron ammonia-ice absorption band. Long Range Reconnaissance Imager (LORRI) panchromatic images used as the background in this composite were taken about 8:33 UT (4:33 a.m. EDT) July 14 at a resolution of 0.6 miles (0.9 kilometers) per pixel and downlinked Oct. 5-6. The ammonia absorption map from LEISA is shown in green on the LORRI image. The region covered by the yellow box is 174 miles across (280 kilometers).