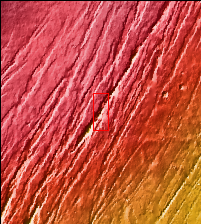 Today's VIS image shows part of Phlegethon Catena. The linear features are created by faulting. Paired faults with down dropped block of material are called graben and are formed due to tectonic forces. The circular and lobate features within the graben are probably formed by collapse of material into underlying voids. It may be that lava flowed along the trace of the graben and left behind a subsurface lava tube. As the roof of the tube collapses the circular features are created.

NASA's Jet Propulsion Laboratory manages the 2001 Mars Odyssey mission for NASA's Science Mission Directorate, Washington, D.C. The Thermal Emission Imaging System (THEMIS) was developed by Arizona State University, Tempe, in collaboration with Raytheon Santa Barbara Remote Sensing. The THEMIS investigation is led by Dr. Philip Christensen at Arizona State University. Lockheed Martin Astronautics, Denver, is the prime contractor for the Odyssey project, and developed and built the orbiter. Mission operations are conducted jointly from Lockheed Martin and from JPL, a division of the California Institute of Technology in Pasadena.