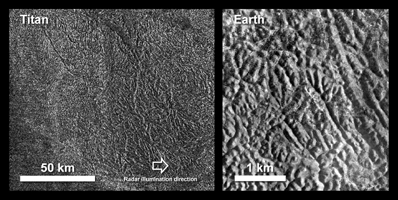 This synthetic-aperture radar image was obtained by NASA's Cassini spacecraft during its T-120 pass over Titan's southern latitudes on June 7, 2016.

The features seen here are an excellent example of "labyrinth terrain." Labyrinth terrains on Titan are thought to be higher areas that have been cut apart by rivers of methane, eroded or dissolved as they were either lifted up or left standing above as the region around them lowered. (Other examples of labyrinth terrain can be seen in PIA10219 .)

In this image, several obvious valley systems have developed, draining liquids from methane rainfall toward the southeast (at top). Several of these systems are near parallel (running from upper left to lower right), suggesting that either the geological structure of the surface or the local topographic gradient (the general slope across the area) may be influencing their direction.

Also presented here is an annotated version of the image, along with an aerial photograph of a region in southern Java known as Gunung Kidul that resembles this Titan labyrinth. This region is limestone that has been dissolved and eroded by water, creating a system of canyons called polygonal karst. Like on Titan, the canyons show a trend from upper left to lower right, in this case controlled by faults or joints. (Java photo from Haryono and Day, Journal of Cave and Karst Studies 66 (2004) 62-69, courtesy of Eko Haryono.)

The Cassini-Huygens mission is a cooperative project of NASA, ESA (the European Space Agency) and the Italian Space Agency. NASA's Jet Propulsion Laboratory, a division of the California Institute of Technology in Pasadena, manages the mission for NASA's Science Mission Directorate, Washington. The Cassini orbiter was designed, developed and assembled at JPL. The radar instrument was built by JPL and the Italian Space Agency, working with team members from the United States and several European countries.