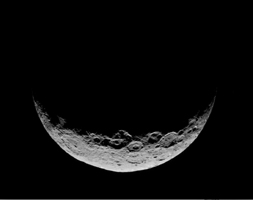 Dawn took this image to help navigators refine their measurements of the spacecraft's position in orbit. Ceres appears as a crescent as Dawn is on the night side of the dwarf planet. Zadeni Crater , which is 80 miles (128 kilometers) wide, is recognizable on the bottom left side of the crescent. The large crater seen on the right side is Urvara Crater , which is 101 miles (163 kilometers) wide.

Large fractures scarring Ceres' surface can also be distinguished here. Dawn captured a similar scene (Figure 1) at higher resolution, although with a slightly different geometry, on April 26, 2015, from its RC3 orbit at an altitude of about 8,450 miles (13,600 kilometers) and an image scale of about 0.81 miles (1.3 kilometers) per pixel.

The geology of Ceres' polar regions is very rough in comparison to that generally found at lower latitudes. This is because colder temperatures near the poles allow craters to hold their original shapes over longer periods of time.

Features found on Ceres are named after gods and goddesses of agriculture, as well as harvest festivals, from around the world. Zadeni is named for the ancient Georgian god of bountiful harvest, while Urvara is an Indian and Iranian deity of plants and fields.