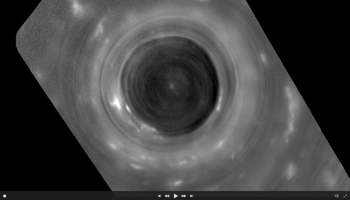 This mosaic of images combines views captured by NASA's Cassini spacecraft as it made the first dive of the mission's Grand Finale on April 26, 2017. It shows a vast swath of Saturn's atmosphere, from the north polar vortex to the boundary of the hexagon-shaped jet stream, to details in bands and swirls at middle latitudes and beyond.

The mosaic is a composite of 137 images captured as Cassini made its first dive toward the gap between Saturn and its rings. It is an update to a previously released image product (see PIA21441 ). In the earlier version, the images were presented as individual movie frames, whereas here, they have been combined into a single, continuous mosaic. The mosaic is presented as a still image as well as a video that pans across its length. Imaging scientists referred to this long, narrow mosaic as a "noodle" in planning the image sequence.

The first frame of the mosaic is centered on Saturn's north pole, and the last frame is centered on a region at 18 degrees north latitude. During the dive, the spacecraft's altitude above the clouds changed from 45,000 to 3,200 miles (72,400 to 8374 kilometers), while the image scale changed from 5.4 miles (8.7 kilometers) per pixel to 0.6 mile (1 kilometer) per pixel.

The bottom of the mosaic (near the end of the movie) has a curved shape. This is where the spacecraft rotated to point its high-gain antenna in the direction of motion as a protective measure before crossing Saturn's ring plane.

The images in this sequence were captured in visible light using the Cassini spacecraft wide-angle camera. The original versions of these images, as sent by the spacecraft, have a size of 512 by 512 pixels. The small image size was chosen in order to allow the camera to take images quickly as Cassini sped over Saturn.

These images of the planet's curved surface were projected onto a flat plane before being combined into a mosaic. Each image was mapped in stereographic projection centered at 55 degree north latitude.

In the movie version, the mosaic is magnified. It begins with a magnification factor of two and smoothly enlarges to a factor of four by the end.