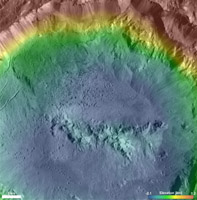 Annotated version
Click on the image for larger version

Haulani Crater (21 miles, 34 kilometers in diameter) is one of the youngest craters on Ceres, as evidenced by its sharp rims and bright, bluish material in enhanced color composite images from the framing camera on NASA's Dawn spacecraft. Haulani is also a good example of a polygonal crater.

This high-resolution topography map of the crater's floor and northern rim displays a prime example of pitted terrains. Those features were likely formed through the rapid vaporization of subsurface water upon impact, and suggest that there is abundant water in Ceres' crust. Pitted terrains have also been found on Mars and Vesta.

This topographic map was produced from the combination of images acquired under multiple illumination angles while the Dawn spacecraft was in its low-altitude mapping orbit, at a distance of about 240 miles (385 kilometers) above the surface. The colors represent elevations ranging from 1.3 miles (2.1 kilometers) below the surface to 0.75 miles (1.2 kilometers) above the surface. The center coordinates of the crater are 5.8 degree north latitude and 10.77 east longitude. An unannotated version of this image is also available.

Haulani is named after the Hawaiian plant goddess.