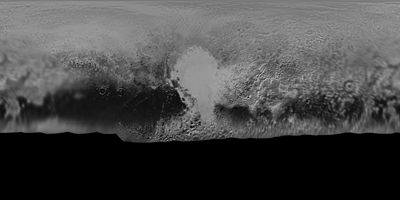 On July 14, 2015, NASA's New Horizons spacecraft made its historic flight through the Pluto system. This detailed, high-quality global mosaic of Pluto was assembled from nearly all of the highest-resolution images obtained by the Long-Range Reconnaissance Imager (LORRI) and the Multispectral Visible Imaging Camera (MVIC) on New Horizons.

The mosaic is the most detailed and comprehensive global view yet of Pluto's surface using New Horizons data. It includes topography data of the hemisphere visible to New Horizons during the spacecraft's closest approach. The topography is derived from digital stereo-image mapping tools that measure the parallax -- or the difference in the apparent relative positions -- of features on the surface obtained at different viewing angles during the encounter. Scientists use these parallax displacements of high and low terrain to estimate landform heights.

The global mosaic has been overlain with transparent, colorized topography data wherever on the surface stereo data is available. Terrain south of about 30°S was in darkness leading up to and during the flyby, so is shown in black. Examples of large-scale topographic features on Pluto include the vast expanse of very flat, low-elevation nitrogen ice plains of Sputnik Planitia ("P") -- note that all feature names in the Pluto system are informal -- and, on the eastern edge of the encounter hemisphere, the aligned, high-elevation ridges of Tartarus Dorsa ("T") that host the enigmatic bladed terrain, mountains, possible cryovolcanos, canyons, craters and more .