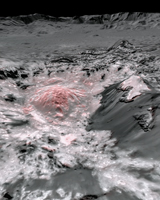 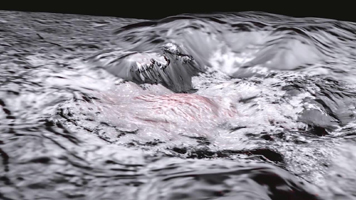 NASA's Dawn spacecraft captured pictures in visible and infrared wavelengths, which were combined to create this false-color view of a region in 57-mile-wide (92-kilometer-wide) Occator Crater on the dwarf planet Ceres (in the main asteroid belt between Mars and Jupiter). Here, recently exposed brine, or salty liquids, in the center of the crater were pushed up from a deep reservoir below Ceres' crust. In this view, they appear reddish.

In the foreground, is Cerealia Facula ("facula" means bright area), a 9-mile-wide (15-kilometer-wide) region with a composition dominated by salts. The central dome, Cerealia Tholus, is about 1.9 miles (3 kilometers) across at its base and 1,100 feet (340 meters) tall. The dome is inside a central depression about 3,000 feet (900 meters) deep.

Both images were produced by Nico Schmedemann, Guni Thangjam and Andreas Nathues from the Dawn Framing Camera Team.

Figure 2 links to an animated gif, made from the Occator Crater mosaics.

Video used to create this animated gif was made by Nico Schmedemann, Guni Thangjam and Andreas Nathues from the Dawn Framing Camera Team.

For a complete list of mission participants, visit: https://solarsystem.nasa.gov/missions/dawn/overview/ .