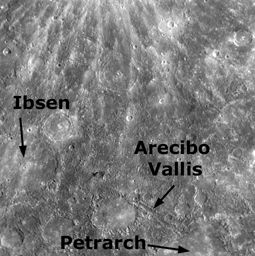 About 69 minutes after MESSENGER's closest approach to Mercury during the mission's second flyby, the NAC acquired this image of a portion of Mercury's surface also seen during the Mariner 10 mission. Toward the lower portion of the image, Arecibo Vallis is visible. Vallis is the Latin word for valley, and valles (the plural of vallis) on Mercury are named for radio telescope observatories. Arecibo Observatory is located in Puerto Rico and has been used to conduct Earth-based studies of Mercury with important results, including the detection of radar-bright materials at Mercury's poles that may be water ice trapped in permanently shadowed craters. Arecibo also observed some bright, rayed craters that have now been better resolved by MESSENGER's latest images ( PIA11356 ). Lately, Arecibo's unique radar capabilities have been threatened with closure due to changed funding priorities. The craters Ibsen (named for the Norwegian playwright) and Petrarch (named for the Italian poet) are also visible in this image. Bright rays from Kuiper crater extend down from the top of the image ( PIA11355 ).