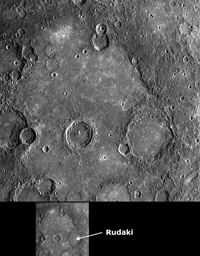 This WAC image shows a close-up view of the crater Rudaki, named for the Persian poet of the late 800s and early 900s. On the floor of Rudaki and also in a broad region surrounding Rudaki to the west are smooth plains, which are far less cratered than the neighboring terrain (except for the small secondary craters from the large, fresh crater to the west of Rudaki). Detailed studies of Mariner 10 images led to the conclusion that these plains near Rudaki were formed by volcanic flows on the surface of Mercury. This image from MESSENGER's second flyby of Mercury shows some nice examples of craters in the plains that appear to have been significantly flooded with lava, leaving only their circular rims preserved. This WAC image is one of five scenes in a high-resolution color mosaic obtained just after MESSENGER's closest approach to Mercury. Three of the other scenes have already been released: the first image after closest approach (see PIA11352 ), a frame showing the craters Polygnotus and Boethius, (see PIA11246 ), and a view of Thakur crater. As was done to create the color composite images of Thakur crater (see PIA11365 ), images acquired in all 11 of the WAC's narrow-band color filters are being used to study the volcanic plains around Rudaki in more detail than was possible from the limited color data of the Mariner 10 mission.