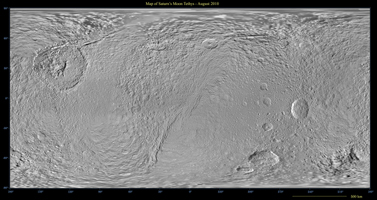 This map is an update to the version released in February 2010 (see PIA12560 ). New data collected during Cassini's Aug. 14, 2010, flyby of the moon are used to fill in the far northern latitudes of the map from about 75 degrees north latitude to the north pole. Coverage also improves farther south on the side of the moon facing away from Saturn. That improved coverage starts at about 40 degrees north latitude and stretches north to the pole in the area roughly west of the large Odysseus Crater (between 160 degrees and 260 degrees west longitude).