New to Old on Enceladus 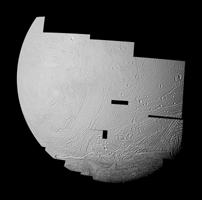 Previous images of the leading hemisphere of the moon in these areas had low resolution or dim light. In this mosaic, 25 images were re-projected to an orthographic map projection. These new images were obtained at a low phase angle in which Enceladus was well lit by the sun. They give Cassini scientists a detailed picture of the complicated tectonic history of the moon.

Several geological terrains can be distinguished in this image. The youngest is the south polar terrain at bottom. The oldest terrain can be seen in the most heavily cratered plains. Terrains of intermediate age are visible in areas of grooved terrains where craters are visible, but where the cratering is not as dense as the oldest cratered plains. Two "islands" of older terrain are visible in the lower left of the image, separated by wide lanes of grooved terrain. The geological relationships revealed in this mosaic will help scientists to reconstruct the exotic surface history of Enceladus.

A map of the rest of the hemisphere (see PIA11684 ) also shows the transition from the moon's more recently formed south polar terrain to older terrains in the north of this hemisphere of Enceladus. Some of the images of this mosaic, captured at an even higher resolution, are available in another mosaic focusing on the south polar region (see PIA11686 ).

This image mosaic and others like it from the close flyby of Enceladus on Nov. 21, 2009, are among the best visible light images Cassini will capture of the region around the "tiger stripes," the fissures that spray icy particles, water vapor and organic compounds, before the moon's south polar region enters winter darkness for the coming years. Cassini scientists will use these new images to study geological activity associated with tiger stripes and their effects on the surrounding terrain. This information, coupled with observations by Cassini's other instruments, will address the question of whether reservoirs of liquid water exist beneath the surface of the moon. See PIA11114 and PIA08386 to learn more.

A second version of the image (see Figure 1), which appears slightly darker than the original, has been contrast-enhanced to increase visibility of surface features.

This view looks toward the area between the leading hemisphere and Saturn-facing side of Enceladus (504 kilometers, 313 miles across). This view is centered on terrain at 20 degrees south latitude, 40 degrees west longitude.

The images were obtained in visible light with the Cassini spacecraft narrow-angle camera on Nov. 21, 2009. The images were acquired at distances of approximately 3,200 to 23,000 kilometers (2,000 to 14,000 miles) from Enceladus and at a sun-Enceladus-spacecraft, or phase, angle of 34 degrees. Image scale is about 50 meters (165 feet) per pixel.