A Rupes and a Ray 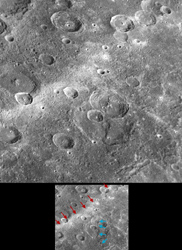 In the lower center of this NAC image, a scarp cuts through two craters (blue arrows). The fact that the scarp transects the craters indicates that it formed after the two crater-forming impact events. Many similar scarps (see PIA11012 ), referred to as rupes, have been identified on Mercury, and rupes are believed to have formed when the interior of Mercury cooled and the planet shrank slightly. The white stripe that cuts diagonally across this NAC image (red arrows) is part of a system of rays emanating from a bright, relatively young crater to the north (see PIA11356 ). This impressive ray system extends for large distances over Mercury's surface, as seen in the global image captured during MESSENGER's second Mercury flyby (see PIA11245 ).