Picture of a Pit-Floor Crater 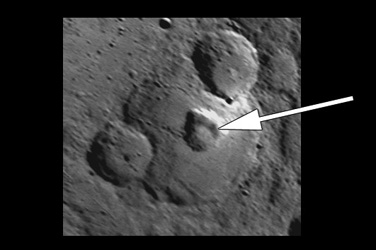 The crater at the center of this image contains a large, nearly circular pit crater, identified with the white arrow. Multiple examples of pit craters ( PIA10186 ) have been observed on Mercury on the floors of impact craters, leading to the name pit-floor craters for the impact structures that host these features. Unlike impact craters, pit craters are rimless, often irregularly shaped, steep-sided, and display no associated ejecta or lava flows. These pit craters are thought to be evidence of shallow volcanic activity and may have formed when retreating magma caused an unsupported area of the surface to collapse, creating a pit. Pit-floor craters may provide an indication of internal igneous processes where other evidence of volcanic processes is absent or ambiguous. The discovery of multiple pit-floor craters augments a growing body of evidence that volcanic activity has been a widespread process in the geologic evolution of Mercury's crust.