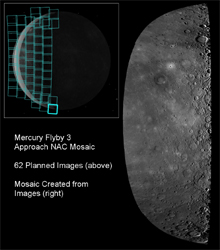 Beginning about 78 minutes prior to the spacecraft's closest approach to Mercury during the mission's third flyby of the innermost planet, the NAC acquired 62 high-resolution images. As shown in figure 1, the 62 images (blue squares) covered the entire sunlit surface of the planet, including terrain not previously imaged by spacecraft and depicted as a featureless gray strip in the inset. On the basis of information about the location of the spacecraft and the pointing of the camera, the 62 images have been mosaicked together to create the image shown above. This image mosaic is in a simple cylindrical map projection and is lower in resolution than the highest resolution mosaic of the flyby images of 500 meters/pixel (0.31 miles/pixel). This mosaic fills a gap that existed in the global map of Mercury prior to the flyby. Today, MESSENGER Science Team members are attending the Geological Society of America Annual Meeting in Portland, Oregon, and presenting some of the latest Mercury science results , including new results from Mercury flyby 3.