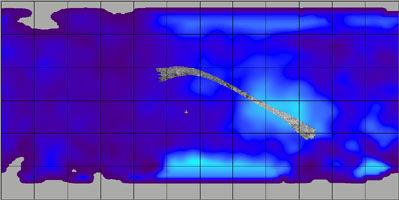 The bright landmass of an enigmatic area known as Xanadu and the intriguing lobed shapes of the Hotei Regio area are visible at the right and far right, respectively, in this radar image of Saturn's moon Titan obtained by NASA's Cassini spacecraft. The annotated version shows Xanadu in the yellow box and Hotei in the blue box. In this radar image, which pans across the low latitudes of Titan, objects appear bright when they are tilted toward the spacecraft or have rough surfaces. Past Cassini measurements have revealed that Xanadu is flat, with scientists suggesting that it has been shaped by tectonic forces. These forces are on display at three parallel ridges, which appear as three thin, squiggly lines framed by bright white stripes just right of the middle of this image, near the bottom of the swath. The annotated image shows the area in a red box. (For a closer view, see PIA10654 ).

The rounded forms of the Hotei region at the far right have been interpreted as possible flows of an ice-spewing cryovolcano. Scientists have proposed that these flows could be ammonia-water slurries that cover parts of the surface. (See PIA11702 and PIA11701 ). The intersection of this image with a previous scene ( PIA11831 ) at different observation angles has made possible the construction of a stereo terrain model ( PIA11831 ), revealing the 3-D shape of the lobes. The forms are typically 100 to 200 meters (330 to 670 feet) in thickness.

The left-hand side of this image shows the dark plains making up much of Titan's low-to-mid latitude surface. Brighter outcrops of bedrock break up the darker terrain. Toward the middle, complex wind-shaped dunes become apparent, in places halting at or wrapping around high-standing bright materials. The dunes are highlighted in a green box.

The image swath was obtained by Cassini's radar instrument on May 12, 2008. It runs from west (left) to east (right). The area covered lies just to the north of, and in one place intersects, the coverage of a previous radar image ( PIA11822 ), revealing more of Titan's low latitudes on the side that faces away from Saturn. Toward the center, features as small as about 300 meters (1,000 feet) can be observed.

This swath maps terrain from about 25 degrees south latitude, 215 degrees west longitude to 30 degrees south latitude, 75 degrees west longitude, in a broad arc covering 6,500 kilometers (about 4,000 miles), and about 150 kilometers (95 miles) at the narrowest point. Illumination is from the north (top). The joints between individual radar beams are visible as long, straight lines that run across parts of the swath. They are not features on the Titan surface.

A contextual image (see above) shows where the footprint is on a cylindrical projection map of the entirety of Titan. Vertical lines for longitude and horizontal lines for latitude are spaced about 30 degrees apart.