Mountains on the Northwest Border of Xanadu, Titan 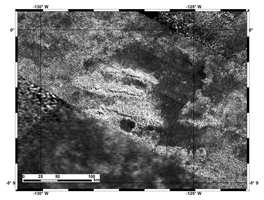 Annotated Version
Click on the image for the larger version

This mosaic, made from radar images obtained by NASA's Cassini spacecraft, shows parallel mountain chains on Saturn's moon Titan. The mountains appear along the northwest border of a region known as Xanadu, two degrees south latitude and minus 127 degrees west longitude. The annotated version shows a grid for latitude and longitude.

The tallest features in this image, which were mapped by the radar instrument, are about 1,900 meters taller than the surrounding plains. Scientists believe the structures rose up because the lithosphere, the outermost layer of the surface, folded up during deformation of the outer water ice shell.

Cassini's radar instrument obtained the images on Feb. 15, 2005 and May 12, 2008. In radar images, objects appear bright when they are tilted toward the spacecraft or have rough surfaces.

The Cassini-Huygens mission is a cooperative project of NASA, the European Space Agency and the Italian Space Agency. The Jet Propulsion Laboratory, a division of the California Institute of Technology in Pasadena, manages the mission for NASA's Science Mission Directorate. The Cassini orbiter was designed, developed and assembled at JPL. The radar instrument was built by JPL and the Italian Space Agency, working with team members from the United States and several European countries.