More Textures in the C Ring 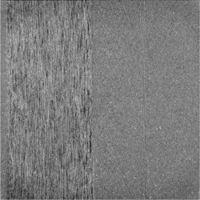 Recent images of features in Saturn's C ring called "plateaus" have deepened the mystery surrounding them. It turns out that these bright bands have a streaky texture that is very different from the textures of the regions around them.

The central feature in this image, called Plateau P5, is found approximately 52,700 miles (84,800 kilometers) from Saturn's center. It is situated amid some undulating structure that characterizes this region of the C ring. None of this structure is well understood.

This image, especially the enhanced version (Figure 1), reveals that the plateau itself is shot through with elongated streaks. This provides information about ways in which the ring particles are interacting with each other, though scientists have not yet worked out what it all means. A more clumpy texture, similar to the "straw" seen previously in the A ring (see PIA21060 ), can be perceived in the surrounding structure, though not as clearly as in PIA21619 .

Plateau regions are brighter than their surroundings, and have sharp edges. Recent evidence indicates that the plateaus do not actually contain more material than their surroundings, nor are they different in their chemical composition, which would mean that their greater brightness is likely due to smaller particle sizes. (If a given amount of mass is broken into smaller particles, it will spread out more [i.e., it will have more surface area].) These texture differences may give a clue about processes at the particle level that create the larger structures that Cassini has observed from greater distance throughout its mission at Saturn.

These images were taken with the camera moving in sync with the orbits of individual ring particles. Therefore, any elongated structures are truly there in the rings, and are not an artifact of particles moving during the exposure (i.e., smear).

In order to create the enhanced image (Figure 1), the large-scale brightness structure of the first image was averaged and then subtracted. What remains are any compact or local structures, including the textures discussed above. Also more visible in the enhanced image are small blemishes, including long, thin vertical lines that come from defects in the camera and short slanted lines that are smeared stars.

This image was taken on the unilluminated side of the rings, with sunlight filtering through the rings as it would through a translucent bathroom window. Brighter regions in the image indicate more material scattering light toward the camera.

This image was taken on May 29, 2017, with the Cassini spacecraft narrow-angle camera. The image was acquired on the sunlit side of the rings from a distance of about 39,800 miles (64,100 kilometers) away from the area pictured. The image scale is 1,460 feet (445 meters) per pixel. The phase angle, or sun-ring-spacecraft angle, is 137 degrees.