Gazing into the Mariner 10 “Gore” 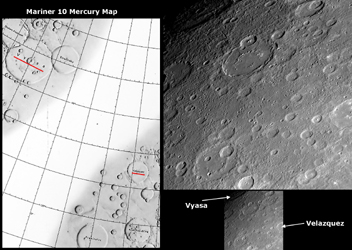 The Mariner 10 mission imaged about 45% of Mercury's surface, but a region in the northeastern portion of the side of the globe studied by that mid-1970s spacecraft had no imaging coverage, resulting in a distinctive "gore" on the Mariner 10 map of Mercury's surface. The left side of this figure shows a portion of the Mariner 10 map with the "gore." MESSENGER's recent Mercury flyby provided the first spacecraft images of much of the surface within the Mariner 10 "gore," and the specific NAC image on the right is located within the "gore" ( PIA11354 ). Mariner 10 imaged the craters Vyasa (named for the ancient Indian poet) and Velazquez (named for the 17th century Spanish painter) but not the region between these two craters, the names of which are underlined in red on the left side Mariner 10 map. The upper center of the NAC image shows a newly seen large crater with a smooth floor and an incompletely developed or partially buried interior peak-ring structure.