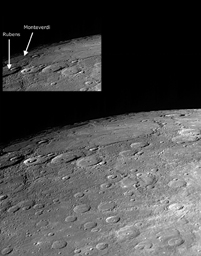 A dominant feature in this NAC image is the large expanse of smooth plains in the upper left of the view. It may be related to extensive plains in Mercury's high northern latitudes that were identified in Mariner 10 . The craters Rubens (named for the 17th century Flemish painter) and Monteverdi (named for the Italian composer of the late 1500s and early 1600s) are located near the western edge of the unimaged"gore" region in the Mariner 10 coverage of Mercury's surface (see PIA11397 ); most of the surface to the east of these craters is newly imaged terrain. Also visible just right of center in this image is the impressive cliff shown in greater detail in an October 10 image release (see PIA11358 ).