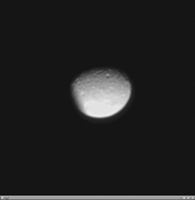 As the moon Enceladus eclipses its neighbor Mimas, Cassini records a scene possible only around the time of Saturn's approaching equinox.

Seven images, each taken about 30 seconds apart, were combined to create this movie which shows the shadow of Enceladus (504 kilometers, or 313 miles, across) darkening Mimas (396 kilometers, or 246 miles, across). Although Saturn has eclipsed moons in previous images (see PIA11143 and PIA11508 ), this is the first time Cassini has imaged one of Saturn's moons being eclipsed by another moon rather than the planet. The novel illumination geometry created as the Saturnian system approaches equinox means that during this time moons orbiting in or near the plane of Saturn's equatorial rings can cast shadows onto the rings and onto each other.

To learn more about this special time and to see a movie of a moon's shadow moving across the rings, see PIA11651 .

The images were taken in visible light with the Cassini spacecraft narrow-angle camera on May 13, 2009. The view was obtained at a distance of approximately 1.3 million kilometers (808,000 miles) from Mimas and at a Sun-Mimas-spacecraft, or phase, angle of 43 degrees. Image scale is 8 kilometers (5 miles) per pixel.