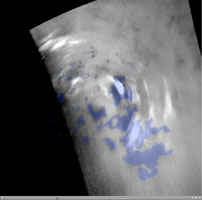 Clouds move above the large methane lakes and seas near the north pole of Saturn's moon Titan in this movie made from images taken by NASA's Cassini spacecraft.

Methane clouds in the troposphere, the lowest part of the atmosphere, appear white here and can be seen moving east over several of Titan's large northern lakes. The darkest areas are lakes and seas of liquid methane, identifiable because they have a low albedo, meaning they do not reflect much light. (The difference in brightness and darkness on the surface here indicates a difference in composition.) The clouds seen near lakes and seas suggest that Titan (5,150 kilometers or 3,200 miles across) may have "lake-effect" clouds created by weather systems over large bodies of liquid. However, without earlier observations to show the clouds did not originate west of the large sea Kraken Mare, scientists can't determine conclusively if these clouds are "lake-effect" clouds.

Near the beginning of the animation, a particularly large cloud can be seen directly over and east of Titan's huge sea, Kraken Mare. If full, Kraken Mare, at 400,000 square kilometers (154,000 square miles), would be almost five times the size of North America's Lake Superior.

Even if these clouds are not directly connected to the lakes and seas, scientists think that frequent detections of clouds at high northern latitudes since 2007 are related to the abundant availability of methane at the surface in this region.

The movie cycles through two versions: a labeled version showing blue outlines for the lakes and a second version with no overlays on the images. The four images used in this animation were taken over a period of about 24 hours from Sept. 22 to 23, 2009. This movie shows a different view of the same data presented in another imaging science subsystem (ISS) movie, PIA12812 . This movie shows each lake (lacus) and sea (mare) identified with a blue-shaded area, based on albedo differences detected by the ISS and radar instruments. The images were re-projected to a polar stereographic projection centered over the north pole of Titan.

Terrain at roughly 180 degrees west longitude is up in the movie. The north pole is below and to the left of the center of the movie, to the right of the top end of Punga Mare.

The clouds are visible above terrain at about 60 to 82 degrees north latitude, 220 to 260 degrees west longitude. Scientists calculate wind speeds from about 0.5 to 10 meters per second (1 to 22 miles per hour), based on tracking of individual cloud features in these images.

Other Cassini observations of clouds in Titan's southern latitudes provide evidence of a seasonal shift of Titan's weather systems to low latitudes from higher, south polar latitudes following the August 2009 equinox in the Saturnian system. (During equinox, the sun lies directly over the equator.) See PIA12810 and PIA12813 to learn more about the changes in Titan's southern hemisphere.

The images were taken with the Cassini spacecraft narrow-angle camera using a spectral filter sensitive to wavelengths of near-infrared light centered at 938 nanometers. The view was obtained at a range of distances from approximately 406,000 kilometers (252,000 miles) to 796,000 kilometers (494,000 miles) from Titan. Scale is about 4 kilometers (2 miles) per pixel in these re-projected images.