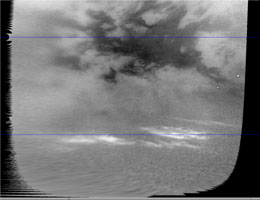 This movie shows clouds in the mid-southern latitudes of Saturn's largest moon, Titan, in a series of images captured by NASA's Cassini spacecraft a few months after fall began in the southern hemisphere.

Methane clouds in the troposphere, the lowest part of the atmosphere, appear white here and are concentrated in a band between 45 and 63 degrees south latitude. In the annotated version of the movie, a blue line shows the location of the equator at the top of the frame, and a second blue line marks the median latitude of the cloud field at 53 degrees south latitude. The darkest areas are surface features, which have a low albedo, meaning they do not reflect much light. The movie shows the clouds moving east across an area south of the dark region Belet, which is at the top of the frame. (Belet looks dark because it is made from different materials than neighboring areas.) These seven images were captured over a period of about 24 hours from Dec. 13 to 14, 2009.

Over the past several years, Cassini has consistently observed clouds at Titan's mid-southern latitudes. More recent images also show clouds close to the moon's equator (see PIA12810 ). These observations provide evidence of a seasonal shift of Titan's weather systems to low latitudes following the Saturnian system's August 2009 equinox. (During equinox, the sun lies directly over the equator.) See PIA11667 to learn how the sun's illumination of the Saturnian system changed during the equinox transition to spring in the northern hemispheres and to fall in the southern hemispheres of the planet and its moons.

In 2004, during Titan's late southern summer, extensive cloud systems were common in Titan's south polar region (see PIA06110 , PIA06124 and PIA06241 ). Since 2005, southern polar cloud systems have been observed infrequently, and one year after the equinox, which happens once in roughly 15 Earth years, extensive near-equatorial clouds have been seen.

The cloud patterns observed from late southern summer to early southern fall on Titan suggest that Titan's global atmospheric circulation is influenced by both the atmosphere and the surface. The temperature of the surface responds more rapidly to changes in illumination than does the cold, thick atmosphere. Outbreaks such as the clouds seen here may be the Titan equivalent of what creates Earth's tropical rainforest climates, even though the delayed reaction to the change of seasons and the apparently sudden shift is more reminiscent of the behavior over Earth's tropical oceans than over tropical land areas.

See PIA12811 and PIA12812 for other recent movies showing clouds near the moon's north pole.

Scientists calculate wind speeds up to about 10 meters per second (22 miles per hour) in these images, based on tracking of individual cloud features. Cosmic ray hits on the camera detectors appear as bright dots in some frames of the movie.

This view looks toward the southern, trailing hemisphere of Titan (5,150 kilometers or 3,200 miles across). The images have been re-projected to a simple cylindrical projection centered on terrain at 32 degrees south latitude, 263 degrees west longitude. Image scale is 4 kilometers (2.5 miles) per pixel.

The images were taken with the Cassini spacecraft narrow-angle camera using a spectral filter sensitive to wavelengths of near-infrared light centered at 938 nanometers. The view was obtained at a distance of approximately 929,000 kilometers (577,000 miles) from Titan.