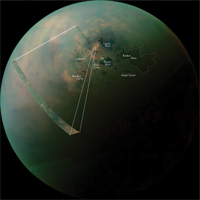 This false-color mosaic, made from infrared data collected by NASA's Cassini spacecraft, reveals the differences in the composition of surface materials around hydrocarbon lakes at Titan, Saturn's largest moon. Titan is the only other place in the solar system that we know has stable liquid on its surface, though its lakes are made of liquid ethane and methane rather than liquid water. While there is one large lake and a few smaller ones near Titan's south pole, almost all of Titan's lakes appear near the moon's north pole.

The orange areas are thought to be evaporite -- the Titan equivalent of salt flats on Earth. The evaporated material is thought to be organic chemicals originally from Titan's haze particles that once dissolved in liquid methane. They appear orange in this image against the greenish backdrop of Titan's typical bedrock of water ice.

In this mosaic, Kraken Mare, which is Titan's largest sea and covers about the same area as Earth's Caspian Sea and Lake Superior combined, can be seen spreading out with many tendrils on the upper right,. The big dark zone up and left of Kraken is Ligeia Mare, the second largest sea. Below Ligeia, shaped similar to a sports fan's foam finger that points just up from left, is Punga Mare, the third largest Titan Sea. Numerous other smaller lakes dot the area. Titan's north pole is located in the geographic location just above the end of the "finger" of Punga Mare.

Figure 1 highlights a high-resolution strip and shows the north pole marked with a red cross. Other smaller lakes are also labeled.

The data shown here were obtained by Cassini's visual and infrared mapping spectrometer during a close flyby of Titan on Sept. 12, 2013.

Until now, the spectrometer has only been able to capture distant, oblique or partial views of this area. The Sept. 12, 2013, flyby provided better viewing geometry. And sunlight has begun to pierce the winter darkness that shrouded Titan's north pole at the time of Cassini's arrival in the Saturn system nine years ago. A thick cap of haze that once hung over the north pole has also dissipated as northern summer approaches. And, thankfully, Titan's beautiful, almost cloudless, rain-free weather continued during this flyby.

The resolution varies across this composite view depending on when each cube of data was acquired, but the best surface sampling is 2 miles (3 kilometers) per pixel.

The Cassini-Huygens mission is a cooperative project of NASA, the European Space Agency and the Italian Space Agency. The Jet Propulsion Laboratory, a division of the California Institute of Technology in Pasadena, manages the mission for NASA's Science Mission Directorate, Washington, D.C. The Cassini orbiter and the visual and infrared mapping spectrometer were designed, developed and assembled at JPL. VIMS operations are based at the University of Arizona, Tucson.