Dark Lakes on a Bright Landscape 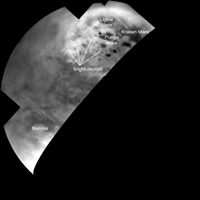 Ultracold hydrocarbon lakes and seas (dark shapes) near the north pole of Saturn's moon Titan can be seen embedded in some kind of bright surface material in this infrared mosaic from NASA's Cassini mission.

The bright area suggests that the surface here is different from the rest of Titan, which might help explain why almost all of the lakes are found in this region. Titan's lakes have very distinctive shapes -- rounded cookie-cutter silhouettes and steep sides -- and a variety of formation mechanisms have been proposed. The explanations range from the collapse of land after a volcanic eruption to karst terrain, where liquids dissolve soluble bedrock. Karst terrains on Earth can create spectacular topography such as the Carlsbad Caverns in New Mexico.

Titan is the only world in the solar system other than Earth that is known to have stable bodies of liquid on the surface. Titan's, however, are composed of liquid ethane and methane rather than liquid water. While there is one large lake and a few smaller ones near Titan's south pole, almost all of Titan's lakes appear near the moon's north pole. Scientists are using images like these to understand why.

The north pole is at the upper right in this view, marked with a cross. The largest of the dark shapes, at the upper right, is Kraken Mare, which is about the same size as Earth's Caspian Sea and Lake Superior put together. To its upper left lies Ligeia Mare, the second largest sea (about 300 miles, or 500 kilometers, across). Directly below Ligeia Mare, Punga Mare (about 240 miles, or 380 kilometers, across) lies near the north pole.

The surface around the lakes appears brighter than Titan's generally bland (darker grey) mid-latitudes. At the lower left, Titan's largest impact crater, Menrva, can be seen as a bright feature almost completed surrounded by darker areas of widespread dunes. (Earlier views of Menrva are available at PIA06154 , PIA08365 and PIA14541 .) In this view, features at low latitudes are harder to discern because they were close to the horizon when these high-latitude observations were made.

The near-infrared images that make up this mosaic were obtained by Cassini's imaging science subsystem on July 10, 2013. They were obtained in the near infrared band of light (938 nanometers), close to the visible range of light that human eyes can see. To human eyes, the lakes would still appear darker than the surrounding terrain. Seven imaging footprints (with four images per footprint), were used to make this mosaic in order to maximize signal from Titan's surface through the hazy atmosphere. The image scale is 1.8 miles (2.9 kilometers) per pixel.

Until now, Cassini's imaging science subsystem has only been able to capture distant, oblique or partial views of this area (e.g., PIA08930 and PIA12812 ). Three recent flybys provided better viewing geometry now that sunlight has pierced the winter darkness that shrouded Titan's north pole at the time of Cassini's arrival in the Saturn system nine years ago. A thick cap of haze that once hung over the north pole has also dissipated as northern summer approaches. And, thankfully, Titan's beautiful, almost cloudless, rain-free weather continued during Cassini's flybys this past summer.

For comparison, Cassini's visual and infrared spectrometer also obtained data on the same area around the same time: PIA17471 . Other imaging camera views can be seen at PIA17472 and PIA17473 .

The Cassini-Huygens mission is a cooperative project of NASA, the European Space Agency and the Italian Space Agency. The Jet Propulsion Laboratory, a division of the California Institute of Technology, Pasadena, manages the Cassini-Huygens mission for NASA's Science Mission Directorate in Washington. The Cassini orbiter and its two onboard cameras were designed, developed and assembled at JPL. The imaging team consists of scientists from the United States, the United Kingdom, France and Germany. The imaging operations center is based at the Space Science Institute in Boulder, Colo.